Warning: Parameter 2 to qtranxf_postsFilter() expected to be a reference, value given in /home/treddieffex/public_html/wp-includes/class-wp-hook.php on line 298
 Zakynthian folk theatre | Theatrumundi

We do not have any specific knowledge on the origins of Zakynthian folk theatre. Some trace its roots in the Dionysian feasts of ancient Greece. This belief, however, is doubtful for many reasons, including the fact that Zakynthos was completely depopulated by the end of the 15th century AD due to various wars and invasions. Its inhabitants either left the island or were decimated, the crops were deserted and life was degraded. Even the smallest bits of ancient culture have been extinguished at this era.

When the Venetians conquered the island, they announced to their people that anyone could live in the deserted island wherever they wanted. They promised them land and privileges. Many people from various places came to live in the deserted island such as fallen noble families from the West, old Byzantine lords who managed to flee form the Turkish and people who lost everything and had no other place to live. They settled in the depopulated island and began a new life. Around the island’s Venetian commander the nobility (nobili) gathered around him. The craftsmen moved to Aigialos and the new community was born.

In the carnival, noble people used to organize theatrical plays inside their “Palazzo”. Aigialos’ craftsmen wanted to have their own entertainment as well because they had no right to enter the manors and have fun with the noble.

The guild played an important role as well. This is what Zakynthian historian Ntinos Konomos aptly claims, (“Eptanisiaka Fylla, Secember 1953, p. 47). The guild created their own church and their own entertainment: open air plays. These plays were based on Italian old templates, as many craftsmen were Italian. They have already seen “Commedia dell’Arte” in their country and thus, Zakynthian folk theatre was born in Aigialos. Open air plays took plays every Carnival that became known as “Omilies”

It is believed that in the beginning they used to play silently a type of farcical pantomime. Additionally, when there were not enough people to play an “Omilia” they played a form of pantomime. Then they added speech. This is how the name “Omilia” can be explained[1]. Thus “Omilia” was a performance not silent but with dialogues. This, however, is only speculation.

It looks like that Cretan refugees who came into the island after the siege of Crete by the Turkish in 1669, helped the Zakynthian folk theatre evolve. These people carried with them the works of Cretan theatre which Zakynthian guilds took and began performing during the Carnival and transformed them into “Omilies”. In these standards they adapted local plays which were adjusted according to the needs of an open air production. They didn’t last long and they did not need a stage to be played, so the troupe could go from one area to another to perform easily. However, some of these plays have been heavily influenced by Cretan theatre even in terms of language. (Krinos and Anthia, Mertillos and Daphne) 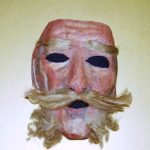 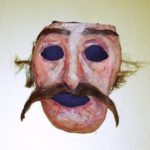 Mask of Kritis from the Omilia Alexis and Chryssavgi

The actors were folksy people: porters, chariot builders, cobblers, butchers etc. Accordingly, every guild used to organize their own “Omilies” whose actors consisted of members of their own. Even in the later years, various troupes used to have a professional homogeneity, and this shows us that when the guilds were on their glorious days, they were the exclusive actors. As time passed, many of these actors, who started acting by coincidence, began to gain expertise in that matter. Over the last few years, there were in Zakynthos the Mylonopoulos brothers where experts in “omilies”. They organized them every year and they played along with their children.

The repertoire of Zakynthian folk theater consisted mainly of plays with rhymes of fifteen syllables, made from unknown purpose. One of the most famous plays were “Krinos and Anthia”, “Mertyllos and Daphne” “Alexis and Chryssavgi”, “Gaidourokavala” and Gouseli’s “Hassis” which seems to have been written as an “Omilia” and was part of this repertoire from the early days of folk theater until the interwar era. Then we have the plays of the Cretan theatre such as “Erotokritos”, “Abraham’s sacrifice”, “Erophili”, which were fully performed, or transformed according to the needs of the open air theatre. Finally, there were some later additions of non-Zakynthian plays (Golfo, Athanasios Diakos_

The content of this plays was usually amorous, but had also satirical and sarcastic elements. Marietta Giannopoulou published in her magazine, Ionios Anthologia (1934) excerpts of three “Omilies” (Krinos, Mertyllos, Alexis) and Ntinos Konomos had found excerpts from other plays as well (Kakkava). Sadly everything was lost due to the destruction of Zakynthos by the earthquake on 1953.

The performances took place in the countryside during the days of the Carnival. The troupes were sitting in a large road or in a square, and were formed in oval or a circle, within a ten-meter diameter, depending the formation of the stage. In Krinos, for example the formation was long and narrow. In one end the king, the queen, and their consulates were standing. In the middle Krinos performed. When he eloped with Anthia, they moved to the other end. There the lovers were caught by soldiers who transported them to where the king stood and there their trial was about to take place. The play began with an actor addressing the crowd. The actor-narrator would often announce some information about the “Omilia” that was about to be performed, even though these information were pretty much the same about every play. The audience was standing around the scene or was looking through their windows. When the actors were not playing, they would mix with their crowd.

The scenery was either simple (i.e. a branch of a tree) or entirely absent. The actors wore masks made of wax. Their costumes were colorful without any time consistency. The young lover (Krinos, Mertyllos, and Erotokritos) would wear a hat with colorful ribbons, a scarf around his neck, a red belt and a black pair of trousers. The king was wearing a colorful costume (similar to the one we see on playing cards and a paper crown. Sometimes he would wear a uniform of a Greek Army officer. His consultant wore a tailcoat. Women would wear colorful vests and waistcoats. The servant would often wear the costume of a contemporary servant with a white apron and small ribbons.

Female roles were performed by men and this was the reason young men and boys were preferred because of their high pitch voice. The recitation of the verses was done in a singing-like way. They stressed the first syllables and stretched the others. The basis of the second verse was half-note down from the first. Supposing that the actor started singing in A in the first verse, in the second he would sing in G sharp. This peculiar reciting, however could only be expressed orally.

A lot of times the actors would improvise. Improvisations would be in a satirical way and sometimes they were used to tease a member of the audience, who, in many cases would tease them back, and the most common teasing towards the actors was to tell them “What sort of Omilia are you doing? Why don’t you go watch the other one?” This was due to the fact that during the carnival two or three “Omilies” would take place at the same time. In that way “Omilies” were performed in the town of Zakynthos and the troupes would go from one neighborhood to another and an actor would take out an empty saucer so the people could give them money.

In the villages they preferred long-lasting plays. They would, for example, perform the whole “Erotokritos” play and even use horses in the jousting scene. The troupes would give one or two performances in the village and they usually play the same play in the Zakynthos town later that week. When there was an “Omilia” in a village, people from nearby villages would gather as well to watch them.

IS IT A FOLK THEATRE?

We described the performances of Zakynthian folk theatre as briefly as we could, but now we should ask ourselves “Was this really a theatre for the people?”

It’s a fact that it didn’t bear new theatrical types, like Commedia dell’arte or Shadow Theatre did. However, through the plays of the Zakynthian folk theatre three new characters were created. First of all the two young lovers. They may belong to different social classes but love unifies them. Since the social structure of the island made put extreme boundaries between the social classes, the smashing of social discrimination and the unification of the two youngsters was a social issue. The two young lovers are confronted with the young lady’s (or sometimes the young man’s) father. This personality represents old fashioned values which are overthrown in the end.

Furthermore, the plays of Zakynthian folk theatre were close to the people who were the audience. The actor was also a part of the people, the spectators knew him from his everyday life. During the play actors and spectators teased each other, and thus a connection between the audience and the actors was established. All those who saw the play of “Erotokritos” in Kipos would have surely noticed the distance between the audience and the spectacle, especially at the scenes of the “Ghiostra”. In the way “Erotokritos” was played in Zakynthos. The very spectators of the play were, in fact, the spectators of the jousting. They would encourage the jousters who fought in their horses between the crowd, and they would finally cheer for the victory of Erotokritos who would win the fight, dressed in white.

Nowadays that there are many attempts to recreate people’s theatre should not forget the experience and tradition of the Zakynthian folk theater. 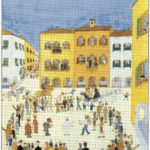 [1] Omilia (Ομιλία) is the Greek word for speech.

An interview of KOSTAS KAPODISTRIAS &nbsp; Zakynthiot actor and director Kostas Kapodistrias is one of the few people who know Zakynthian “Omilies” very well in theory as well as in action, since he is a ground-breaking ...

The stage “tradition” of ancient greek tragedy: the national theatre of greece and the art theatre-karolos koun

KATERINA ARVANITI &nbsp; The paper examines the two different “schools” of approaches to the performances of ancient Greek tragedy, namely the one by the National Theatre the other by the Art Theatre (Τheatro Technis), which ...